Making pictures under pressure - in which I partake in a photoshoot.

I was involved in a photoshoot last week.

The lovely team at Subject Matter Photographic Art are gathering information about their artists, and wanted some video footage of me in action.

So obviously I had to look the part.

I got my hair dyed and threw off my old anorak in favour of a duffle coat that blended more gently into the autumn landscape.


NO OF COURSE I DIDN'T GET MY HAIR DYED!

WHO DO YOU THINK I AM?


But someone not far from here who shall remain nameless agreed that it looks less grey for 'having been treated', and if they can't tell the difference then its a very good thing that I didn't spend £100 and half a day of my life for the privilege.


So what is it like making photos when being filmed?

But it is interesting that the photos that I made bear a lot of resemblance the the kind of images that I normally make in more relaxed circumstances. Only a little less predictable.

So I shall share a few with you now.

All taken at Hawkwood, my suburban sanctuary, just before it poured with rain. 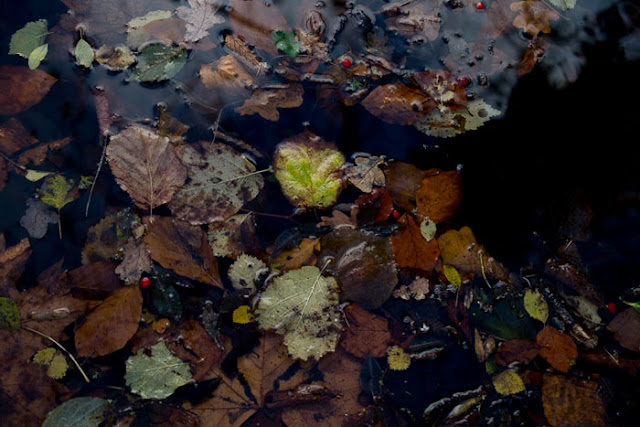 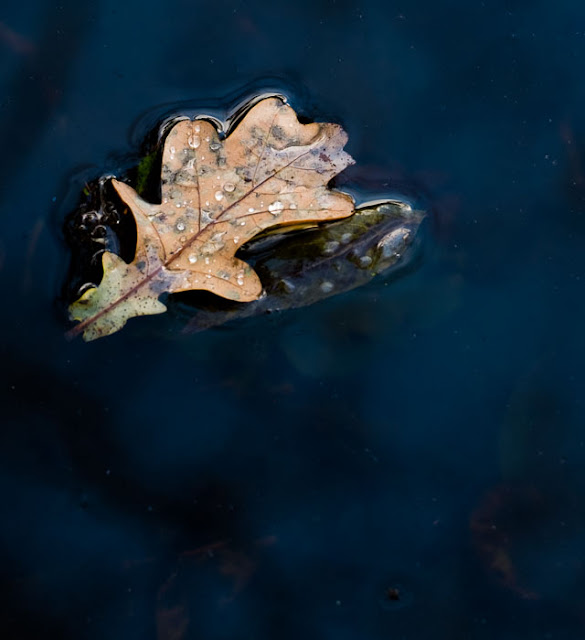 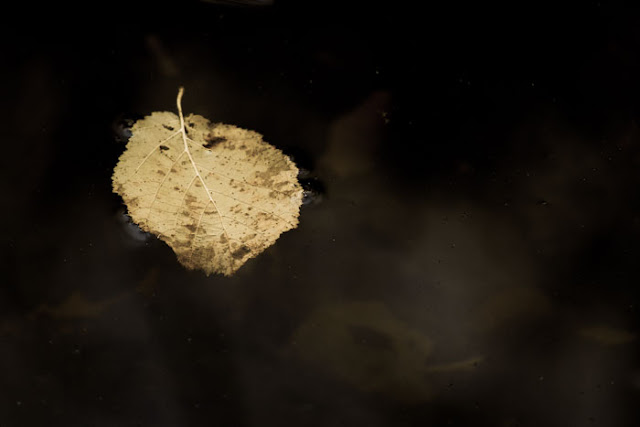 Reflected branches on my pond. Random compositions. Some rather fuzzy. 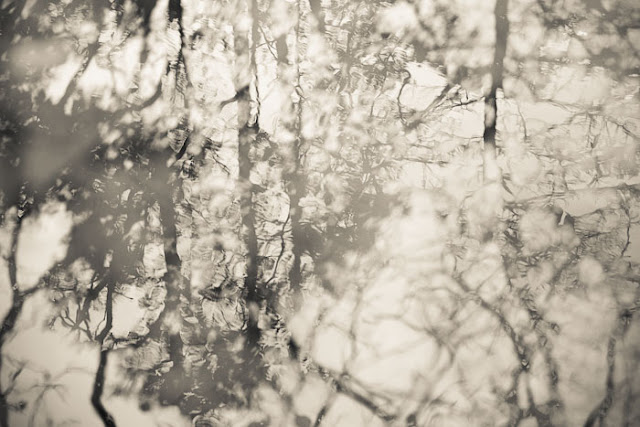 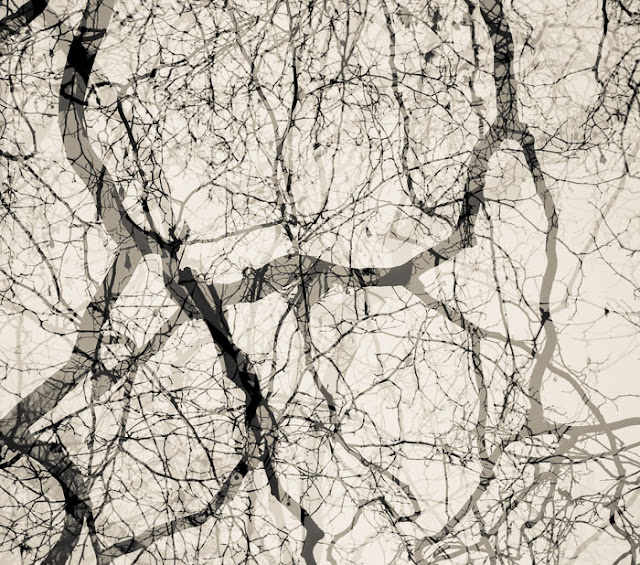 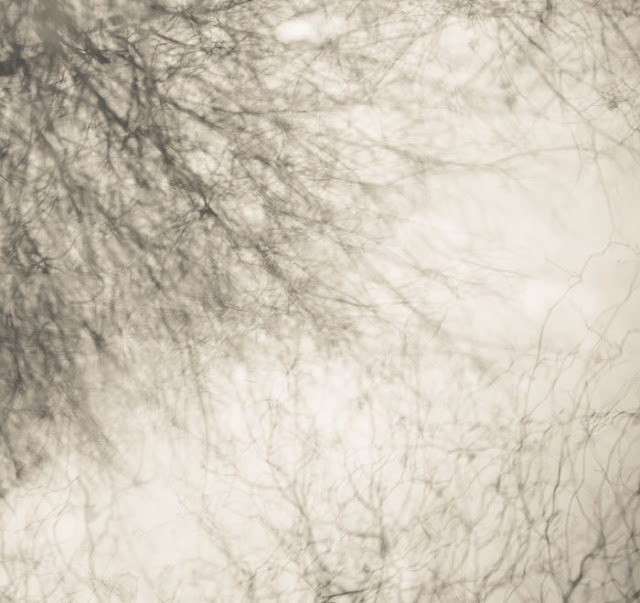 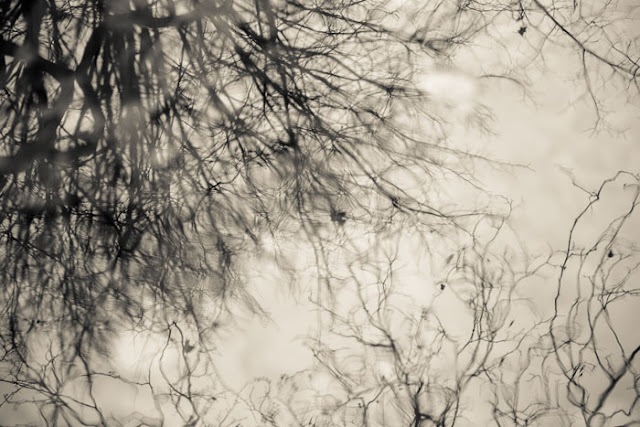 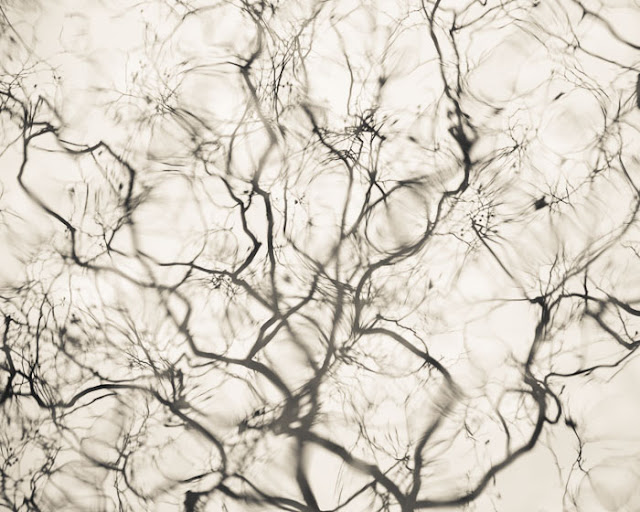 Some lone  leaves on hedges 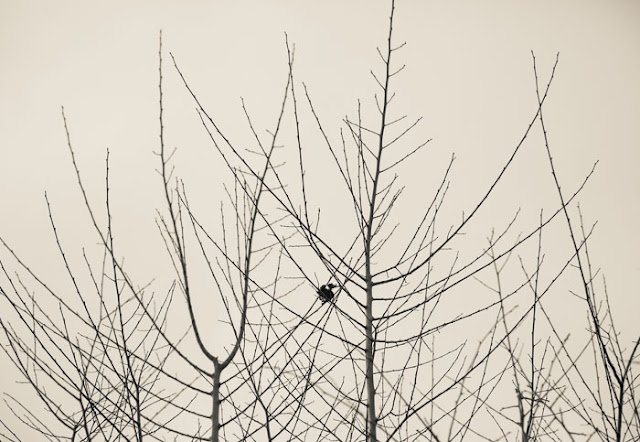 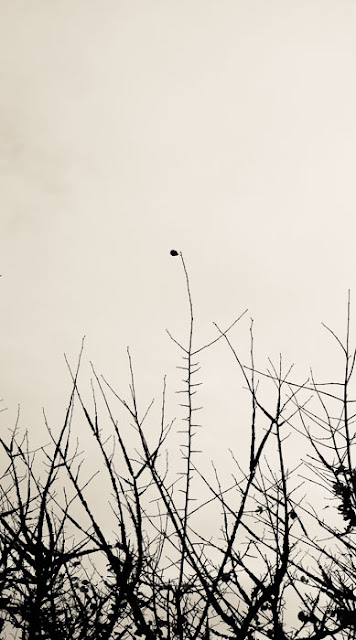 As I have said before " I love it when there are just a few leaves left on the branches in autumn." 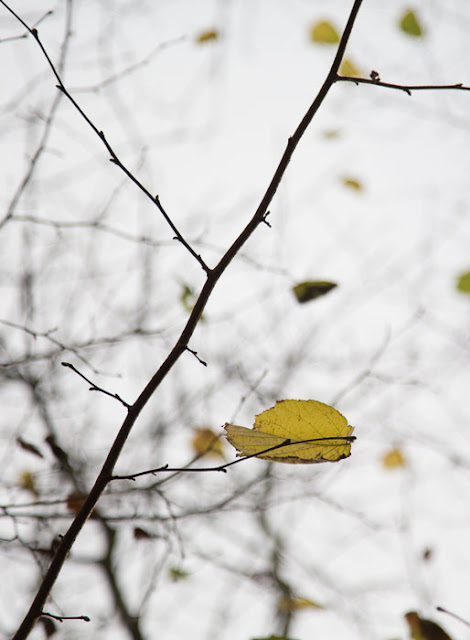 This is rough nature. No beautiful views.


and a flock of crows flew over, crowing loudly above the telegraph lines and treetops. 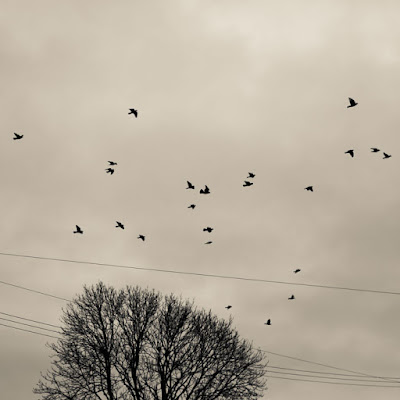 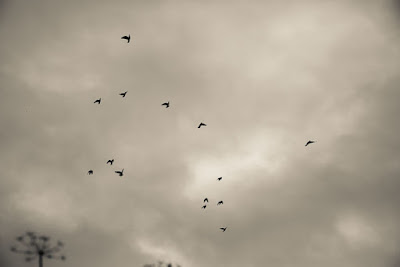 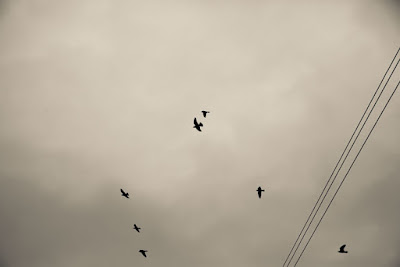 When you try to capture a moving flocks of birds at very short notice there is no time to compose. I enjoy the randomness of the images.


We fnished off down by the stream, and the old rope swing. 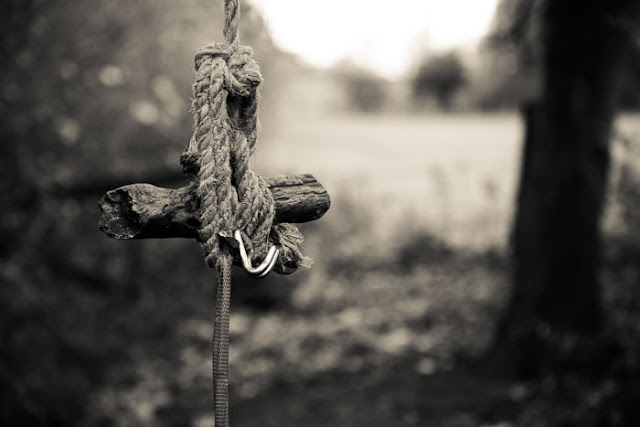 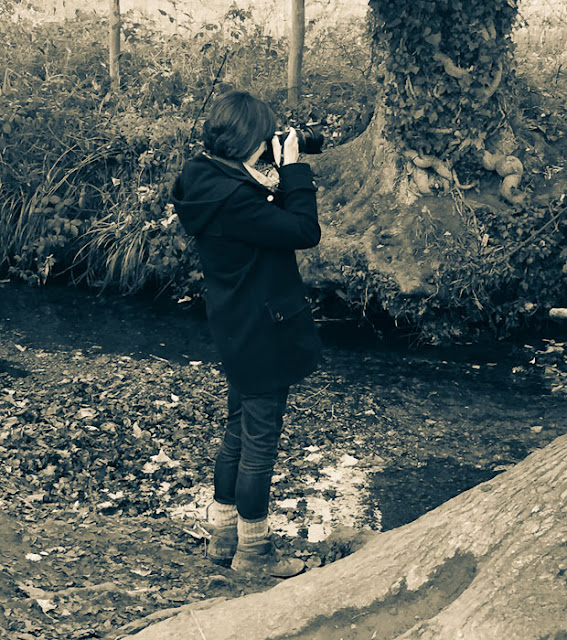 The swing has had an upgrade


Every time I go to Hawkwood I find something new to enjoy.

Tomorrow I am off to New Zealand, so I will leave it behind me for a few months, and will return when new shoots are appearing on these same branches.

It will be the same as always, and different as always. That is the pleasure of revisiting an old friend.

I have been wondering what to do with the images that I made from Abisko in Sweden, encouraged by Hans Strand and Better Moments photographic tours.

The scenes of autumn gold will be long gone now. Snow has almost certainly fallen within the arctic circle.

Birch leaves were vivid gold and falling fast while I was there in September, and here in the UK they are now doing the same.

As I make my final preparations for my trip down under to experience late spring and summer in New Zealand, I feel I should share some of the autmn gold that I experienced in the arctic circle before I head off into the longer days and bluer skies.

I experimented with different methods of capturing the landscape.

I was surprised by the geometry of this rock on the river bank.


Multiple exposure...... done in the camera. 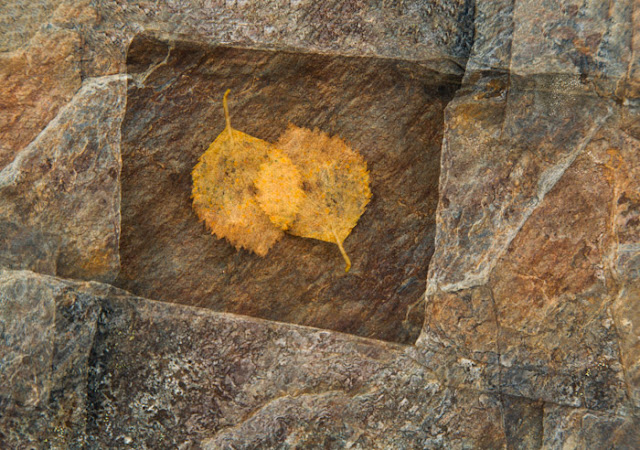 This one with pale blue sky is one of my personal favourites, and has been added, with another from Abisko to my website gallery 'Arborescence' ; in celebration of trees.

Focus stacking involves taking several exposures of the same scene focusing at different distances away from the camera. These can then be combined using digital software in Photoshop to give better clarity and depth of field within an image, and without the use of a tilt shift lens.

You can find out more about focus stacking in this video by Phillip McCordall.


Not normally something I would do, but when in Rome....

Capturing reflections of the golden trees overhanging the Abisko River


The overwhelming gold colours are still imprinted in my mind.

It was a very special place.

Invasion of the supermouse - in which I get a little disturbed by the presence of mice in my house.

The downstairs loo was a no go area as far as I was concerned.

We put down luxurious blue food.

They carried on moving rocks and eating food for 2 weeks.

I opened the door of the cupboard under the sink to see if they had gone.

Large, fat, supersized mouse gazed out at me from the top of the tampon pile.

I screamed and ran. Mouse probably ate more food and wondered what on earth was wrong.

They were supposed to die ( yes I know, it is cruel to kill animals, but I can't live with mice and that's the end of the matter). Humane traps are all very well, but you have to drive them to the local woods and let them out far, far away. Otherwise they just come back home and move more rocks.

I have caused a mouse to freeeze in the middle of the kitchen floor on a previous occasions, so loud and high pitched was my scream.

I don't do mice or snakes.

Other half (OH) doesn't do wasps.

Luckily we can help each other out in this respect. He caught the mouse that was stunned to inaction on the kitchen floor in  saucepan and returned it to the garden.

I opened  the window and let out the wasp that was causing OH to freak out in the study.

The mice appear to have gone, thanks to the rodent control man who has  different blue food.

He was very keen to show me photos on his phone of various pests that he has controlled.

I can cope perfectly well with those. They are just insects. I have prior experience of those in hospitals and bed and breakfasts that I have stayed in. They phase me not one bit. 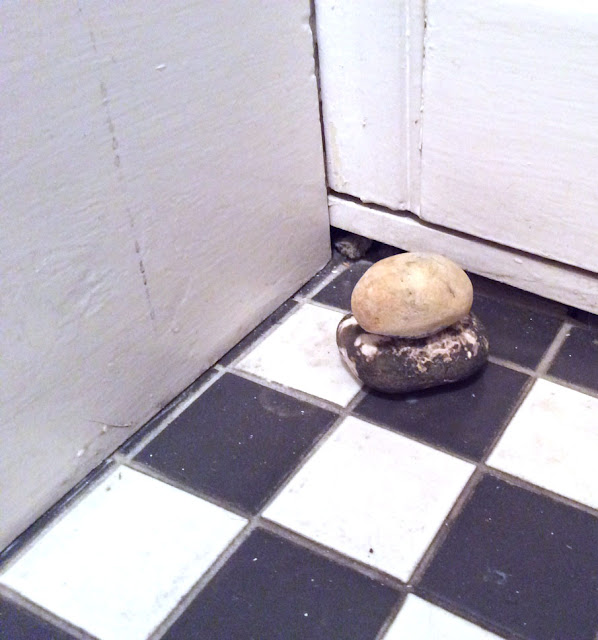 OH thought it would be very amusing to put larger rocks down in the loo as a joke.

What he didn't bank on was my being so shocked to see large rocks on the floor that I actually convinced myself that it was a large mouse sitting on a rock, and screamed louder than ever before.


I need to get my own back.

SUGGESTIONS ON A POSTCARD PLEASE

You will be my friend forever.


This is the pond where the dog ( deceased) liked to swim.

I go there and remember the way that she loved to wallow around in the water. I spent many a happy hour spent exploring the light and reflections on the surface while she buried her nose in the mud.

Today the woods were graced with the song of the local parakeets. Imposters from foreign shores. Noisy and destructive.

The autumn colours are good this year.  Flickr abounds with autumn trees and misty scenes.

I popped down to Hawkwood this afternoon as a break from jobs around the house.

With my new camera I have the facility to watch multiple exposure images appear before my eyes. Live view on the OMD-5 gives a little more control to the random process that is multiple exposure.

I am practising for New Zealand. It is less than 4 weeks to go until I head back 'down under'.

And if I can master the art of multiple exposure with this lovely little camera, then my load will be significantly lighter.