Some of my readers were a little confused and concerned about me after my last post. I was quietly letting you know that MA book art has not been a bed of roses.

In fact it has been a very strange year, in which I was almost squeezed into a little grey box, but broke out fighting in the nick of time.

It does not come naturally to me to quit.

In fact I can't remember when I last did.

I am a 'completer-finisher' in the Belbin personality test. Someone who does what they say they will do. Not a maker or shaker. Just a plain ordinary, get on with the job sort of person.

So it turns out that book art is not for me.

I can play the conceptual art game if I have to, but not if it is at the expense of the enjoyment of my photography. I lost the plot near the end of term, and produced a work called 'Blood, Sweat and Tears'.

I didn't want any of my friends to see it so I didn't invite them to the end of year show.

It has real blood, and dust. It is a book about a failed project.


I was sent home for the holidays to 'reflect on why it is so successful'.

At which point, I knew I could go no further.

So I went home, put all my books away, tidied my desk and made a book for my daughter about my grandson. 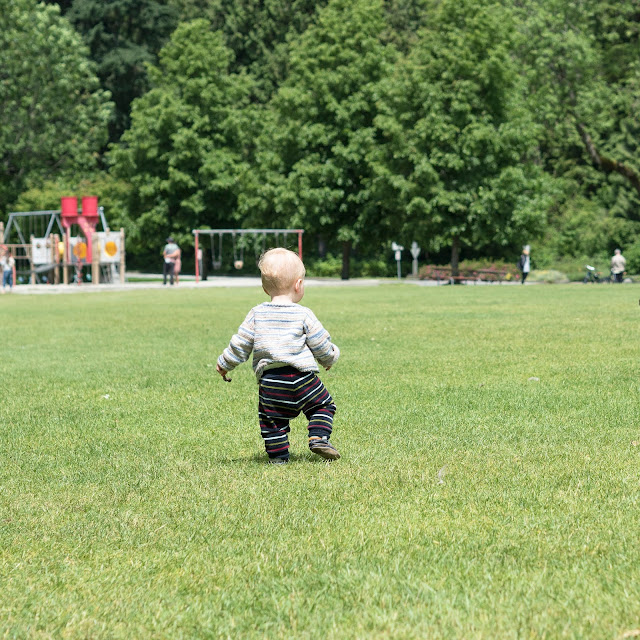 After which, I felt so much better that I took my camera down to the woods and took some photos of sunlight on the stream.

After which I felt better still.

So I printed some postcards for a postcard exhibition.


And then I felt so good that I did some gardening, and listened to the mad chaffinch that tweets from dawn to dusk outside my kitchen window.

I even did some hoovering and collected a variety of dubious objects from the floor and made pictures with them.

I started with the plague of house flies that is currently in my kitchen for reasons yet to be discovered, and moved on upstairs, where I found no shortage of dust and dead animals.

I would like to say that all of this dirt was in OH's hovel ( study), but no one is allowed to touch anything in there, and nor would they want to. I might let you see some photos if it doesn't change in the next 5 years......


I thought that these photos were getting back to the realms of 'blood, sweat and tears', so I stopped that nonsense and moved on to flowers. Which didn't last long, as it was getting too formal.

So then I just stopped, and read a book, and slept in the garden in the sun, and bought some luxury bath oil, and went for some walks in the rain.

And didn't think about writing 4000 words, except to think how amazingly wonderful it was that I no longer have to write them.

I think I will be OK now.

I was nearly squeezed from my colourful world into a little grey box. My lego model from a 'stuckedness' workshop in my first term says it all.

I am on the left. Book art is on the right.

The house is a bit clean, and I might even make some books!

all over bar the shouting..... an MA visual art show goes up

The annual MA show is nearly ready. Tonight is the night.

Blood, sweat and tears makes it's debut, and then I will gracefully bow out.

No more do I wish to get three hundred Whats-app messages daily about when I might like to sit in a room tucked away at the end of the corridor that no-one will find, as the invigilator for a show that is just work in progress for those who have another year of this game before they become famous.

No more trekking to London to find my route barred by builders, or the library closed for a staff meeting. 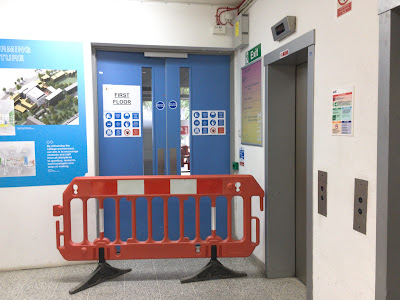 But before the term is ended we must put on a show, and before we can put on a show we must paint the walls and make our shelves, and mop the floor.

Plug sockets must be hidden under paper and painted over the top. 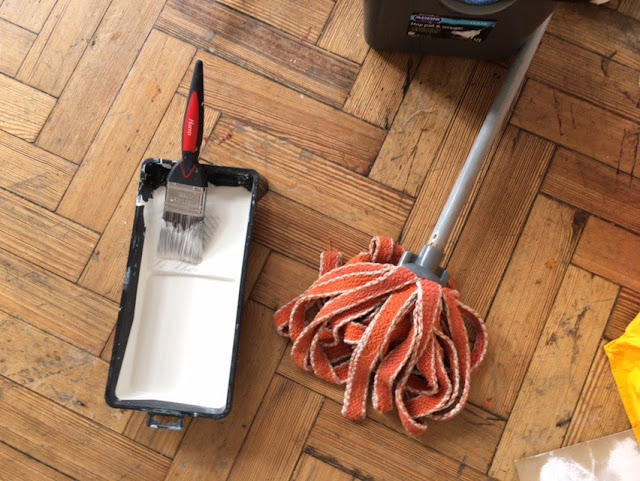 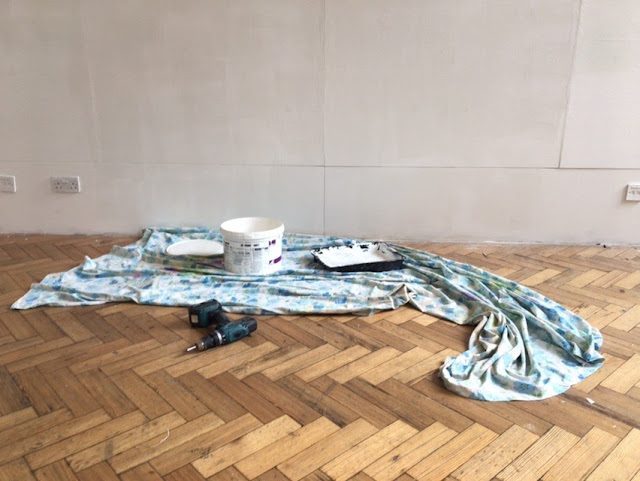 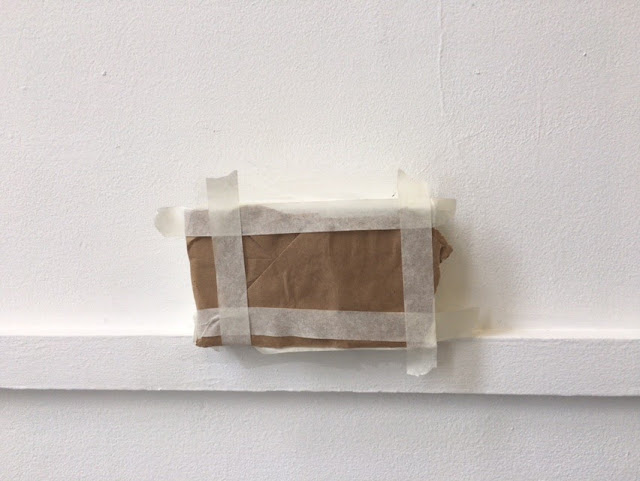 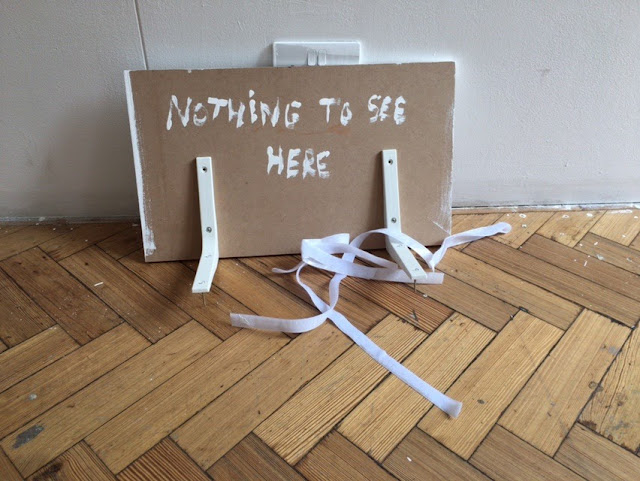 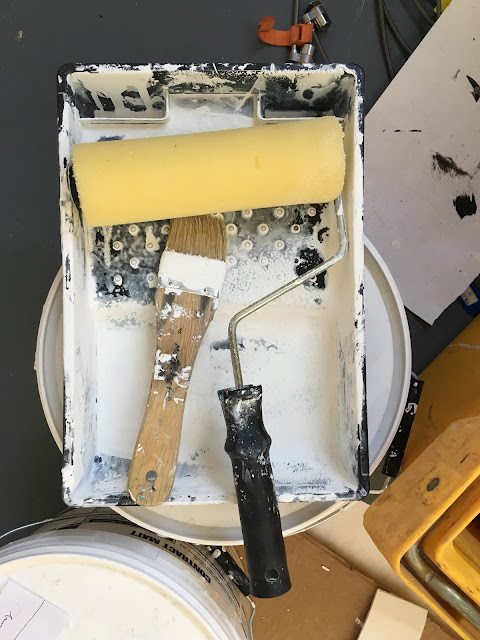 Works will, by tonight have found their way out of bags and onto the newly painted plinths.

I got out of being a carpenter/painter by showing a piece of messy work that needs a messy plinth that had been discarded by a previous student. 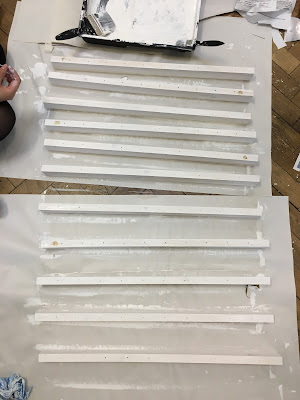 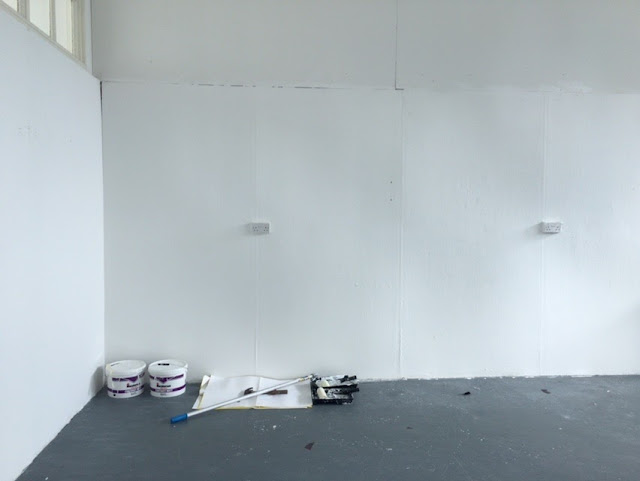 As you can see, the floor is a mess. No one can clear all the splodges of white paint.

But I made a very good job of sweeping the floor, having carried a dustpan and brush all around London for a day. 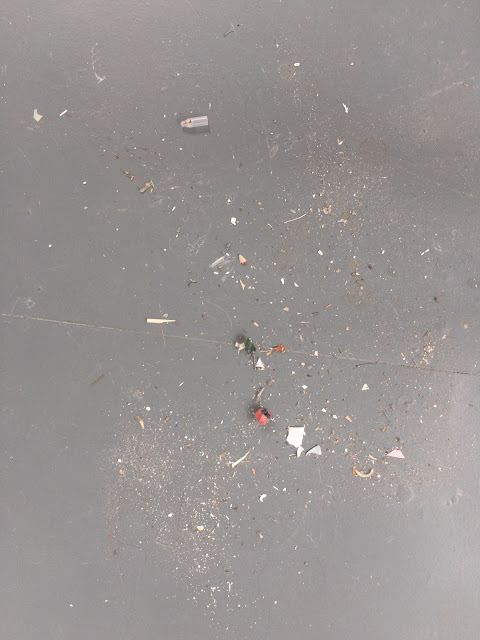 I am getting into dust big time, after seeing the fabulous show A Handful of Dust that is currently on at Whitechapel Gallery. 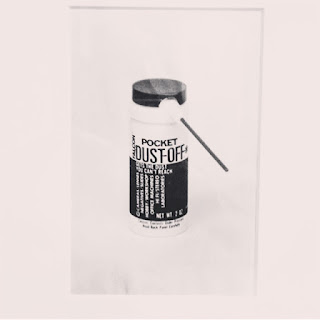 The show was all about dust.

I can sell you a bag if you come along to the MA show.

I will be helping to run the shop, where books that people have laboured over for hours and hours are being sold for about £5.

You will find the dust considerably more expensive.


Anyway, the signs are up, so you won't get lost. 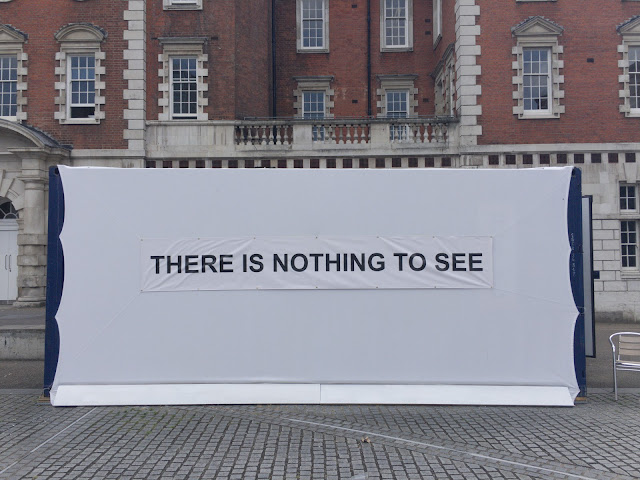 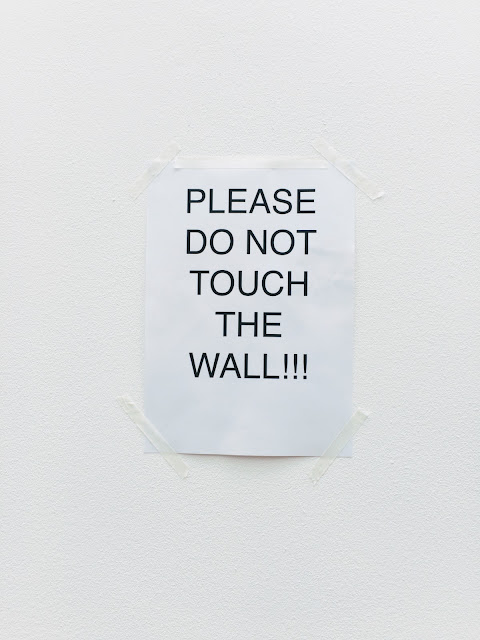 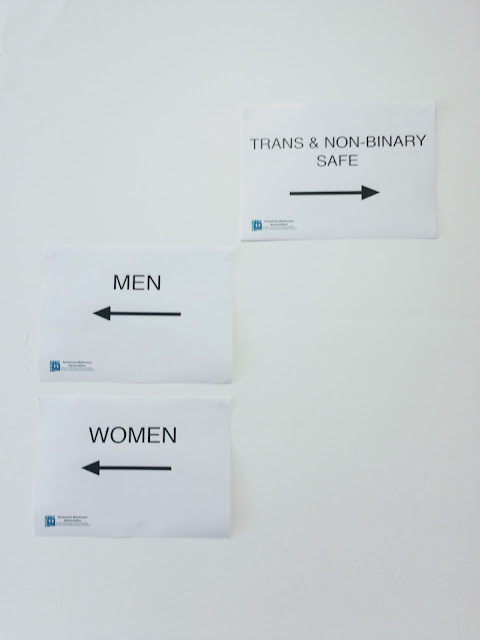 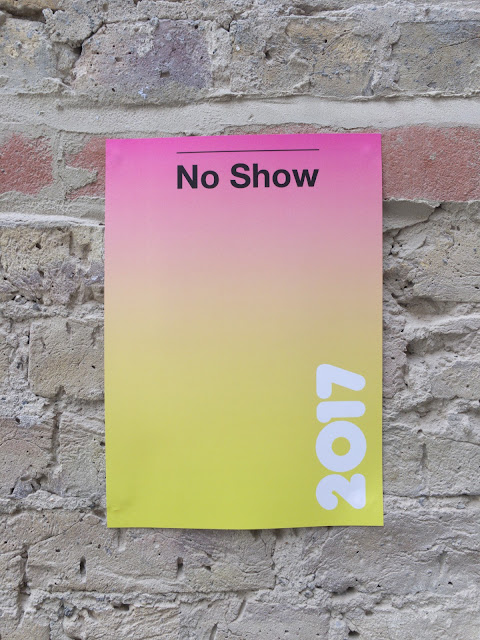 One work sums it all up nicely. 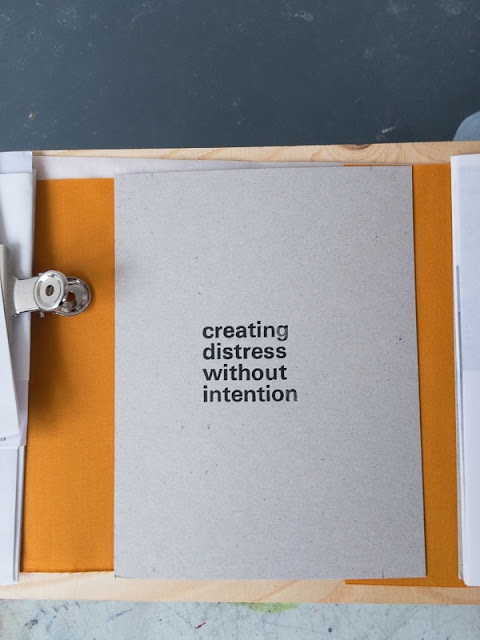 I will be the one in the tennis mask, too embarrassed to show my face. 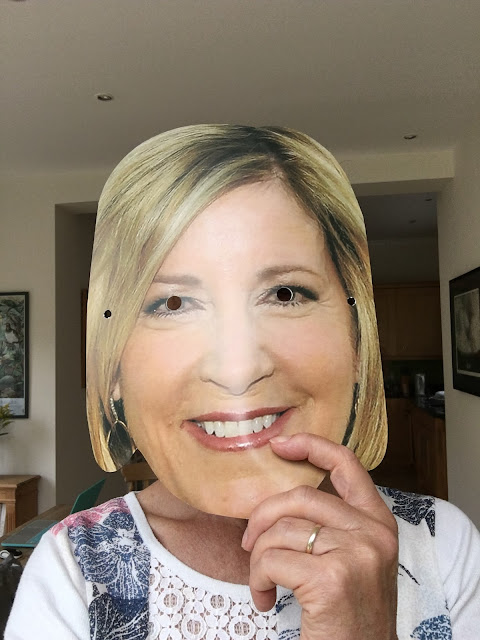 Roll on Sunday and the Wimbledon tennis final.

He's the only one left in it. 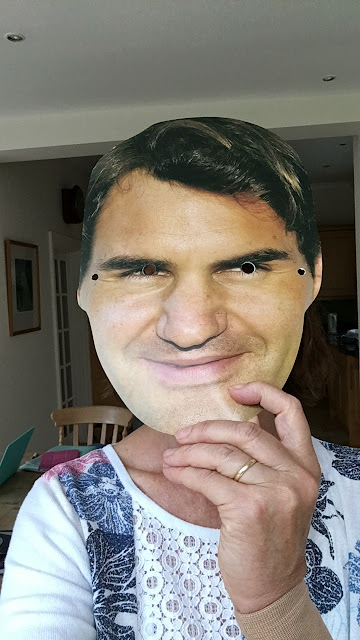