The first comment I received was that is is somewhat darker than my normal fare.


It was taken on a very dark, rainy day at Milford Sound, New Zealand. I probably shouldn't tell you that I took it out of my car window, as the rain was so heavy.

Fiordland is the wettest part of New Zealand, so it was fitting that it rained.

The image title comes from having seen work by the artist Sir Kyffin Williams RA (1918- 2006).

Some of his largest paintings were very dark, featuring the Welsh hills. 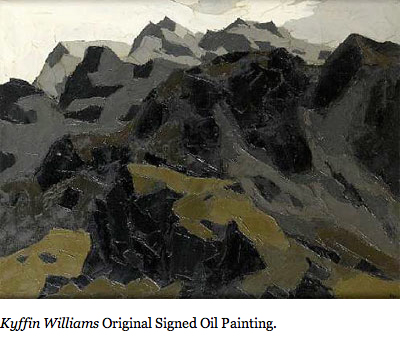 This image is from the website of Robert Perera fine art, who deal with his work.


Here is something much lighter, in case you were getting concerned.

Posted by caroline fraser - an ordinary life at Wednesday, May 27, 2015 0 comments

An afternoon at Photo London 2015

I immersed myself for 4 hours yesterday.

I missed all the talks, the VIP lounge and the book signings, and concentrated on searching out images that moved me.

There is so much to see in the endless rooms of photographic works from high end galleries.

Not to mention the fascinating exhibition "Beneath the Surface" from the V&A archive, and the chance to get up very close to some of Sebastien Salgado's prints from 'Genesis in Platinum'.


Here are a few of my personal favourites from artists that I have newly discovered from my visit.

His work for the series 'Notes for an Epilogue' describes the 'disintegration or spiritual tradition and physical heritage in Romania'. 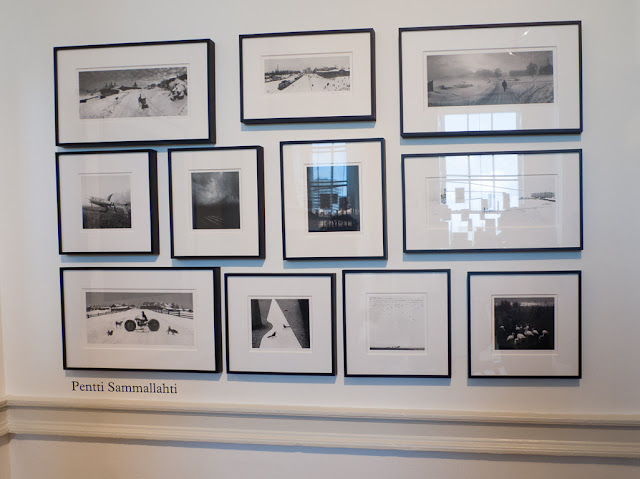 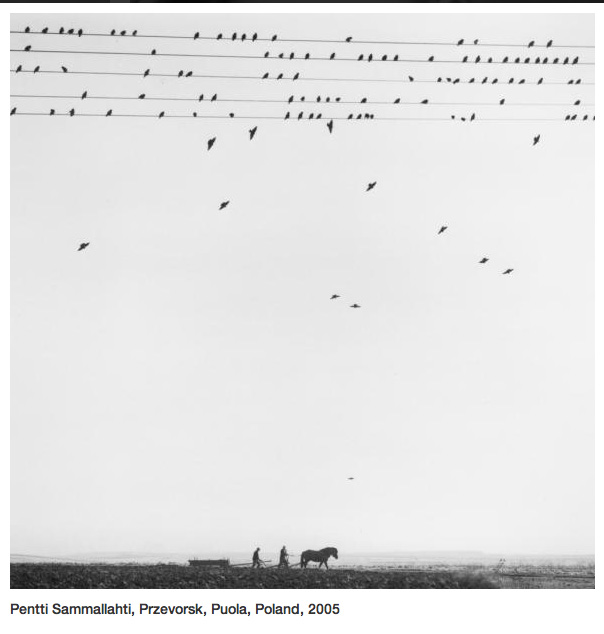 Almost every image that he makes has a bird, animal or human element.


The highlight of my day was the discovery of Masao Yamamoto. His works fit in the palm of your hand, and the quality of the prints quite breathtaking.


The image below is from his series Kawa=Flow 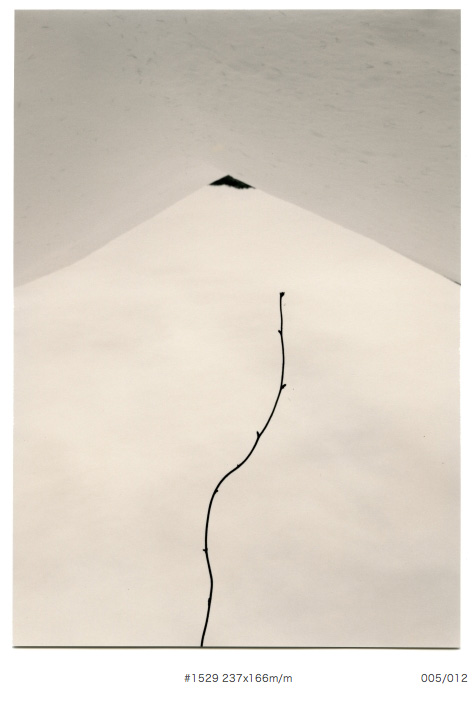 Also at the Photographer's Gallery was the series "Neighbours" by Martina Lindqvist. 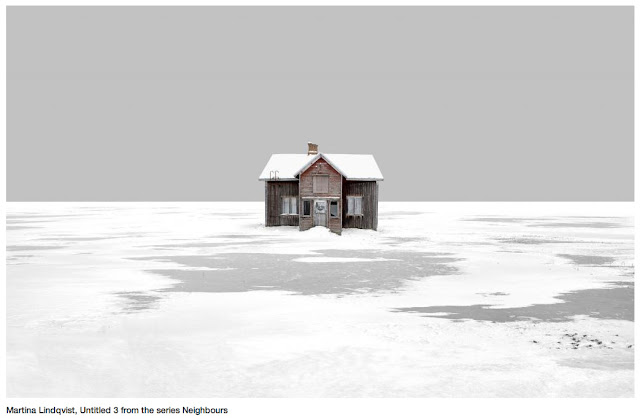 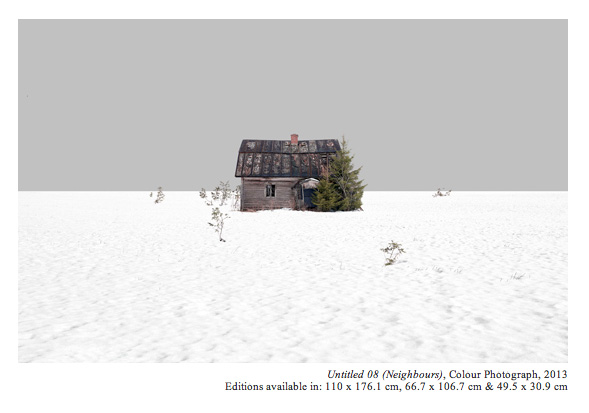 And finally at The Flowers Gallery


And outside on the balcony, overlooking the Thames.


Yet again I am inspired to aim for images of better quality. With stories to tell.

And I have booked the piano tuner; something I have been promising to do for over 2 years.

For unlike this guy, I do have a piano. 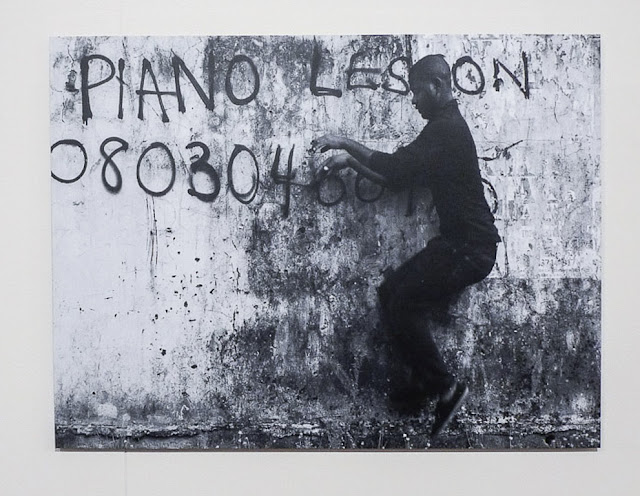 Posted by caroline fraser - an ordinary life at Saturday, May 23, 2015 4 comments

What can you do to help those in Nepal displaced by the earthquake? .........Buy photographic art and support the earthquake relief fund. 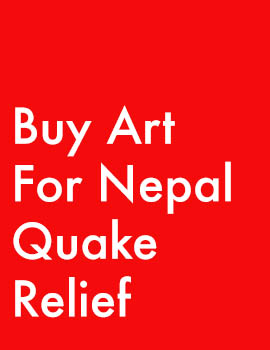 Just click on the link below to view the art. 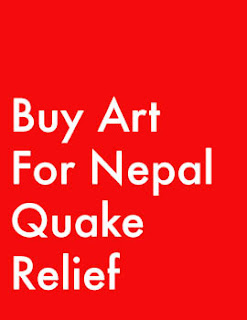 I am one of the participating artists

Click on the link above to view the artworks offered.

Posted by caroline fraser - an ordinary life at Tuesday, May 12, 2015 1 comments

on entering my second childhood - barbie dolls and bird stones


Other half (OH) is getting worried about me.

I have spent my weekend collecting stones and leaves. Stones that look like eggs and stones that have faces. Camber Sands has a plentiful supply, and unlike shopping, stone hunting costs nothing. It is a fine way to spend time on a lovely beach when they skies are grey and the wind is blowing too hard for making photographs.

He feels I am regressing towards five years old. Meanwhile he is advancing rapidly to adulthood, for he has a new telephone.

OH has joined the land of modern technology with a 4G mobile device. He is very pleased with it. I taught him how to send a text message. He is advancing rapidly. Soon he might learn how to take photos with it too. I have avoided upgrading my phone for fear of taking even more photos than I already do.

I haven't told him about my Barbie doll. It would reinforce his view that I am rediscovering my childhood. I found her in an Oxfam shop. She likes to go out in the garden and explore the spring flowers.

When I was 5 I didn't play with dolls, and I have never before owned a Barbie. There is only one problem; she doesn't have many clothes. She has a short skirt. And that is it. No knickers or even a brassiere. And I am not going to go and buy her any. She will have to make do with what she can find.

I chose her for her blue eyes.

Who could resist them?


In the interests of public decency I have fashioned a top for her.

She looks ravishing in pink.

She can look a bit 'naughty' without her top on. We won't go there. That's a very different story.

She is hoping to feature in a book of flowers one day.

The main thing is that she injects a bit of frivolity into my 5 year old life, and fun at five is so much better than dullness in my late 'several decades after 5's.

Which brings me onto age and beauty. Barbie never ages. I sadly do.

Have you tried the new how old do I look app?

I couldn't resist it.

I pointed out to OH that going to India added two years to my life. And it certainly felt like it.

OH pointed out that the holiday had taken two years off my life and that I was now 2 years younger as a result.

We beg to differ.

I shall carry on collecting stones, for that is what I do.


And just so that I can say to OH that I did something with the leaves that were adorning the kitchen table, here is one that looks like a fish. It is from a Magnolia Grandiflora.

I shall carry on playing with my barbie doll.


And I shall carry on looking for birds and other animals.

For if nothing else, it will stop me taking pictures of litter.


For a few minutes at least.

Until the next time.
Posted by caroline fraser - an ordinary life at Wednesday, May 06, 2015 3 comments