Street art in Shoreditch ; out and about in East London


Today was a day for graffiti and street art. Ladies that lunch mixed with students and tourists on a walking tour of East London; from Liverpool Street to Brick Lane, Shoreditch and back, guided by none other than Ben Slow, a street artist with a background in fine art. Ben guided us around the streets, pointing out art where we might never have found it; on the top of lamp-posts, round dark corners and tucked into alley-ways.

East London, where the likes of Tracy Emin and Keira Knightley are allegedly gentrifying one of the oldest parts of the city around the corner from the curry houses of Brick Lane. Where modern flats are replacing the old brick houses and warehouses. Where Boris is not high in the popularity stakes.

So what did I learn about street art?

That street art is respected where graffiti may not be. That it lasts until someone overlays it, which may be a few hours, weeks or days. That money can be made and that many artists also sell work in galleries.  That permission is often given to create it by the owners of properties on which it is created. But that it is often created covertly. That it may be planned laboriously and executed very quickly. That a hard hat and a high-vis jacket can make you invisible while you create a work of art. 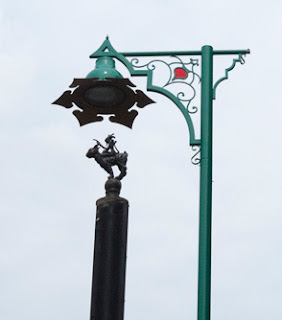 That if you look up, you may see sculptures in unexpected places.

That DAL east is a highly regarded artist with an international reputation, and that the fact that an artist called 'Sea Puppy' thought fit to paint over one of his works just off brick Lane has enraged some of the artistic community.

We saw the work of Belgian artist , Roa, who is 'the most prolific street artist in the world'.

Apparently the local council covered him up with a giant curry advert for the duration of the Olympic Games 2012.

Shame on them; his animals are really impressive, and fun.

Invader has works all over europe based on the space invader game.

Elmac is from Los Angeles and apparently chills his spray paints to reduce the pressure from the can.

And just around the corner from this we found the incredible work of Vhils.


Vhils  is a Portugese artist whose real name is Alexandre Farto. He works with multiple media, including plaster, paper and wood, using chisels and explosives amongst other tools.

We saw a lot of other art too, and graffiti. Some of which I thought was just as good as the art pointed out on the tour, but hey, what do I know?


You will notice that I haven't told you where all of the art is. I don't want to steal the thunder of the guys who run the alternative walking tours. Nor do I wish to do Ben out of a job.

Posted by caroline fraser - an ordinary life at Wednesday, June 26, 2013