Dog, other half and I have been away for the weekend to Sussex. We stayed in Orford; somewhere I have never been before, and certainly somewhere I would be happy to go back to again; quaint houses, a castle, the sea and most importantly, peace and quiet.

The down side; dog had to share our room; I am wondering how we have managed 9 years of her life without encountering this scenario until now?

The last time we shared a room with a dog ( 11 years ago with a  different dog) we had to listen to, and watch, the dog blowing soap bubbles from his mouth all night after eating debris from the rear of the hotel kitchen that was full of detergent and waste food. Fortunately by morning the bubble blowing wore off and we didn't have to call the vet.

The up-side; we had breakfast and dinner with the lovely Lucrezia, shown above; a photograph that has totally blown me away with its size, beauty and incredible quality. Another fine example of how seeing an object in a magazine cannot prepare you for the joy of the real thing. I, and several other diners were unable to keep their eyes off her, and I am sure that the owners of the hotel are delighted that they bought her before her  creator, Christian Tagliavini, won first prize in the fine art category of the Hasselblad Masters awards 2012. see the winners here

Christian Tagliavini's  website and more from the series "1503" can be seen here. The image 'Lucrezia'  and the rest of the series are inspired by the Renaissance masters. All of the models are amateurs, and the clothing constructed from paper, which makes them all the more extraordinary.


The hotel was chosen for its dog friendly nature. What could be more friendly than a beautifully wrapped packet of home made bone shaped dog biscuits that smelt and looked remarkably like cheese straws. All tied up in cellophane and with a lilac ribbon they certainly seemed too good for our dog. She, like me, would have finished the whole packet if she had been allowed to start it.  It was with some difficulty that I refrained from tasting them, and saved myself for the culinary delights to be sampled later, and designed for the human palate.

To distract ourselves we went for a walk and watched the sun set over the estuary and the fishing boats.


Next morning we did some proper 'tramping' along the sea wall and then through organic fields of swedes and brassicas. The organic bit involves covering the fields in what, from a distance, appears to be snow by covering with a pest resistant membrane to reduce the need for pesticides on the growing crops. Watching a tractor pulling a device containing about 8 labourers  across the newly ploughed field to plant the young plants was something new to me; not a job that can be enjoyable, but at least they have a cover from the rain and each other for company.


Dog behaved remarkably well, given that she had no bed to sleep in and had to curl up in a corner of the room.


She almost deserves a biscuit! 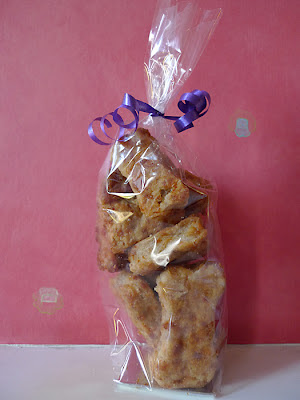 A long day cooped up with the electrician; not the brightest of chaps, but very reliable and extremely safety conscious. He came to change a light bulb ( because the builders had fixed a bathroom light with putty where putty should not have been), and ended up clambering around in my attic putting safety guards over the light fittings in the roof space so that the carpet that shouldn't have been under the roof cladding or on top of the light fittings didn't cause overheating and a fire.

Every time he visits I feel a little less safe in my house; he has suggested a full rewiring, but when pressed to give a quote comes up with so many difficulties, that will necessitate chopping through walls and ceilings, that I cannot bear to let him proceed. We have lived dangerously for 23 years; another one will have to pass, until the massive cracks appearing in the house get fixed and the rewiring can be done at the same time ( at which point I will hopefully be somewhere in New Zealand ostensibly working, but chiefly trying to escape the mayhem, dust and general loss of sanity that I know will ensue).

At one point I tried to find him to give him a cup of tea; I popped my head up the ladder but he was nowhere to be seen......... until I saw his builders bottom emerging from underneath a piece of loft insulation. I can't say I have ever given someone tea in the loft before. I left the tea a suitable distance from him and bid a hasty retreat.

I escaped briefly to to collect the car from having its MOT; and was regaled with the intimate details of all my neighbours' motoring habits and disasters; it seems that a Porsche is a must-have item for one of my neighbours, and that his wife has damaged his other car not once, but twice..............SHOCK, HORROR!

I was truly relieved when my other half arrived home , freeing me to take the dog for a walk before it got dark.

Good things come to those who wait,  thought I. The sun was low in the sky and the trees were beautiful against the setting sky.

I ambled through the woods, hoping that I would be back to the car before darkness fell; I am quite brave when accompanied by dog, but as it gets darker a certain vulnerability sets in.

I decided to take a detour past the farm to see how the  barn appears in the evening light. A smell of burnt wood and some warning signs came as a shock after the peaceful walk.

The barn is burnt to a cinder.

The objects that I photographed only last week are no more; in their place charred beams of wood lying in a pile beside the track, piles of straw and rubble laid out along the lane.

Where there was blue string and orange knots there is hazard warning tape and a tragic mess.


My immediate thought was that this may be arson; all that straw lying around is a real hazard; a bit like my loft really............ until my lovely electrician came along and fixed it. 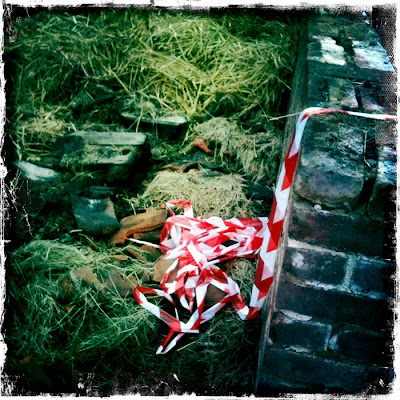 Another image for my 'hazard warning tape' collection.


It seems that the remains of human activity that I have been enjoying capturing, such as knots and pieces of string are now truly just remains, and all that is left now is a collection of images on my computer.

A day out at Dungeness with an old friend was just what I needed. I had been playing around with some iphone pictures of sea holly, and whilst they look fine on the screen, when printed out the quality is lacking, and my plan to create a series was aborted.

Dungeness on a sunny Sunday is a photographer's paradise; wherever we walked we were bumping into tripods and camera cases along with their owners.

Not for me the popular images of rotting boats and bits of old metal; I got seriously attracted to some fishing nets hanging from the roof of an old wooden hut. They reminded me of my recent forays into bits of string; the netting has a beauty and purpose; the knots around the edge of the nets looked like lace at the edge of a tablecloth, and I spent a happy hour (with tripod and a 105mm lens) trying to capture the beauty of the folds and layers against the tarred wall of the shed. I am grateful to my friend Steve for lending me his tripod and getting me back into slow-mode.

But the image that pleases me most from my day out is of a desiccated sea holly leaf that I picked up from the shingle and photographed against the shed wall. My plan to capture the sea holly in autumn at Rye Harbour when the leaves were rotting and wilting into the ground were thwarted by a lack of time; on returning to capture them they had vanished; blown away by the winds and rain.

At Dungeness I realised that fragments of desiccated leaves have survived the winter and that opportunities remain to create something from their curves and delicate shapes.


This dried sea holly leaf has a simplicity that I enjoy, and the background of the fishing shed seems entirely appropriate for the subject matter. It was processed in Lightroom using a cream tone monochrome.

I will return to explore this subject further; it takes me back to my basic instinct to create something beautiful.
Posted by caroline fraser - an ordinary life at Monday, March 12, 2012 0 comments


How to get the creative juices flowing again?

That has been my chief concern for the last few weeks.


Everything seemed a struggle, until I spent a day with IPSE; Independent Photography in the South East.  and in my search for new ideas I joined them for a workshop in deepest Sussex.

I left the house on Saturday morning, not at all sure what I was going to, having lost the information leaflet that described the day. As a consequence I packed cameras, tripod, my portfolio and a sandwich of dried stale bread, wilted lettuce and hummus. It mattered not what the day had in store; I was confident that a day spent amongst photographers had to be a good thing; and it was.

I arrived at a village hall, obviously used by a playgroup, and full of useful signs giving instructions on how to empty a potty ( wear plastic gloves, plastic apron, put contents down loo, and then rinse.....) , where to wear your plimsolls ( in the plimsoll "zone") and how to wash your hands.

The morning was spent in discussion with Mary Maclean; a photographer with a  background in fine art, currently a lecturer at Reading University. 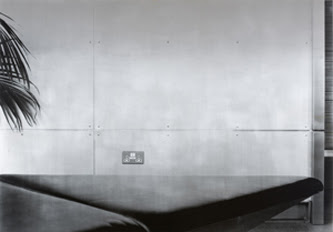 As it says on her website.........
"Mary Maclean is an artist working with photography. Her work explores the representations of the experience of place, questioning the relationship between the photographic image and the subjective experience of socialised, architectural space".

Suffice it to say that her work is stunningly beautiful, minimalistic and created on large sheets of aluminium coated with silver gelatin; a process that creates a depth and sheen to her images that make something extraordinary out of the ordinary, be it a wall, window or a chair.

I came away inspired to get on and create work, for it is only by attempting to emulate great work that one can hope to improve and develop.

Mary's work is about inverting the habitual priorities of looking; as an example in the image above she concentrates on the space between the paintings rather than the paintings themselves.

Much of my work concerns the inconsequential or mundane. My recent walks have focussed on string and hazard warning tape seen as I pass by the farm and through the woods in Chislehurst.

There will be a series in here somewhere; it is just trying to find its way out.