We're going on a bear hunt......hiking in the rocky mountains


My other half  (OH) and I have been on vacation.

Learning how to speak Canadian. It is important as our children now live in Canada, so we need to be able to communicate with them.

So we took a vacation ( not a holiday)

and used lots of washrooms ( not toilet/loo), and definitely not restroom or bathroom ( that is for folks south of the border).

We went on a hiking trip in the Rockies with a bunch of really lovely people from around the world.

We used the parking lots when they were not full, ( which they mostly were, for this year the national parks are all free thanks to the 150th anniversary of confederation), 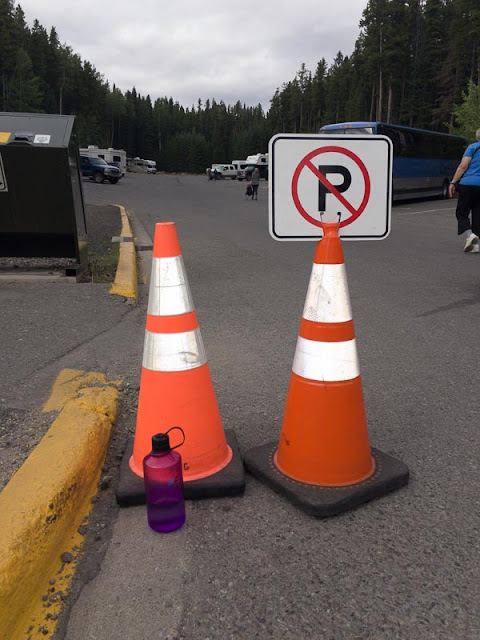 We walked miles, mostly uphill and were rewarded with the most spectacular views. The going was challenging, but 'manageable' according to our lovely 23 year old guide.

We climbed to the top of the mountains and sang songs from musicals at the top (from The Sound of Music, of course). 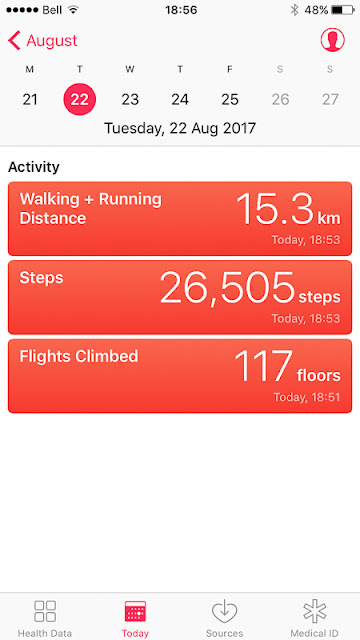 But I had to leave my camera behind, as carrying 2 litres of water, my lunch and an anorak took up all my energy.

Most people use phones as cameras these days anyway.

OH and I had joined a group trip due to the presence of grizzly bears in the rockies. Many trails require a minimum of four people to hike together for safety.

Even with worried bear we were only a party of three. Safety in numbers.

a toque ( pronounced took) ( beanie hat) was essential on the alpine passes, and we spent many loonies ( one dollar coins)  and toonies ( two dollar coins) on coffee at Timmies ( Tim Hortons), or ideally somewhere with better coffee and a nicer colour scheme than khaki brown.

I was told to leave my bear bell behind. Apparently they don't work.

I googled to check and was interested to see what questions others ask about bears.... 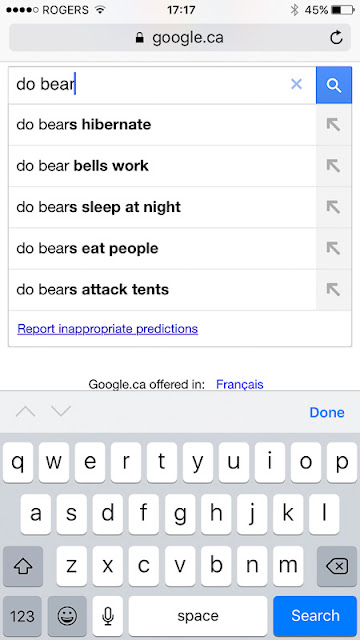 Anyway, it seems they don't work, and making a noise and singing is much better.

Of course everyone really wanted to see a bear. 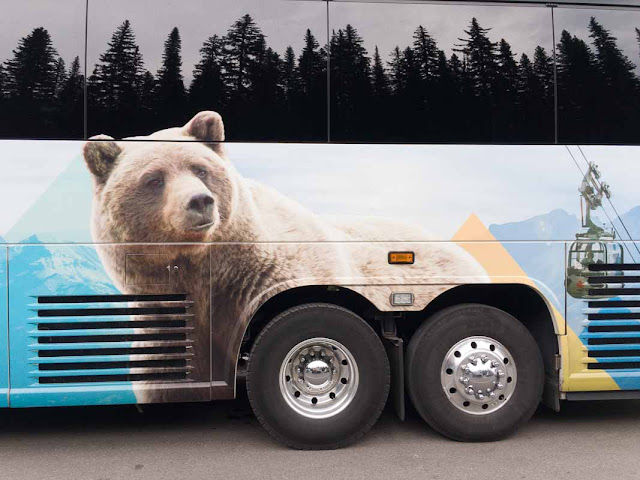 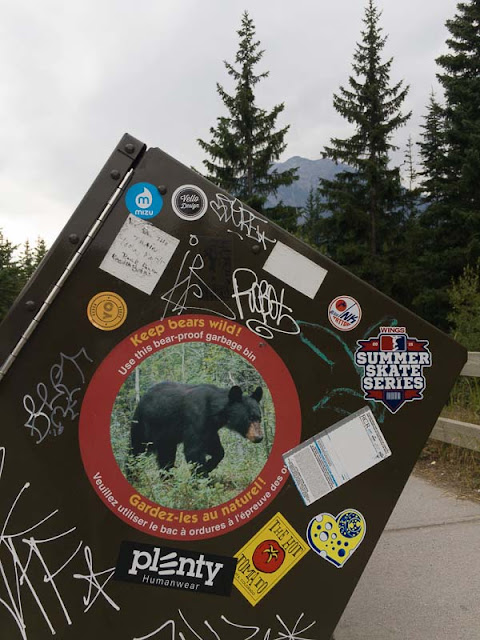 Signs warn of the dangers everywhere in the mountains.

We knew they were around, for we saw the evidence.

As we hiked higher and higher at Lake Louise, the group split near the top of a very steep path.

OH decided to descend with a companion hiker.

I decided to keep going to the top where, surprisingly, a cup of tea awaited in a very high altitude tea house..

We passed a bear with a bell.

At the top we saw a butterfly and a chipmunk, but no bears. 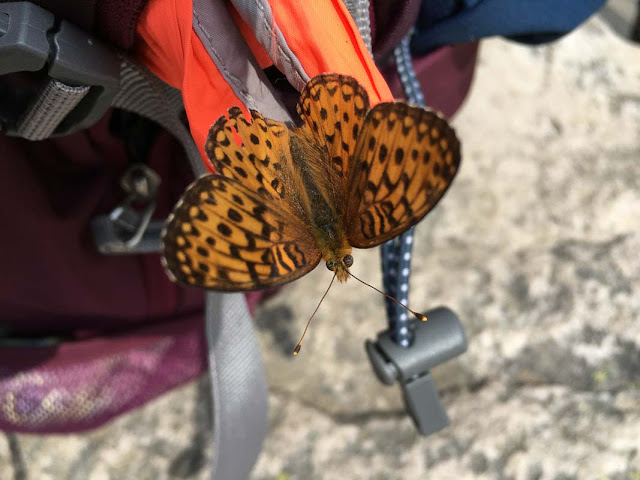 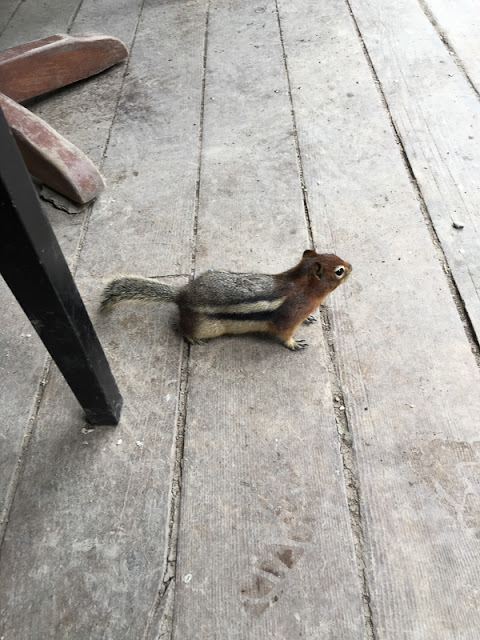 The view was worth the effort, and the wild flowers were yellow and plentiful. 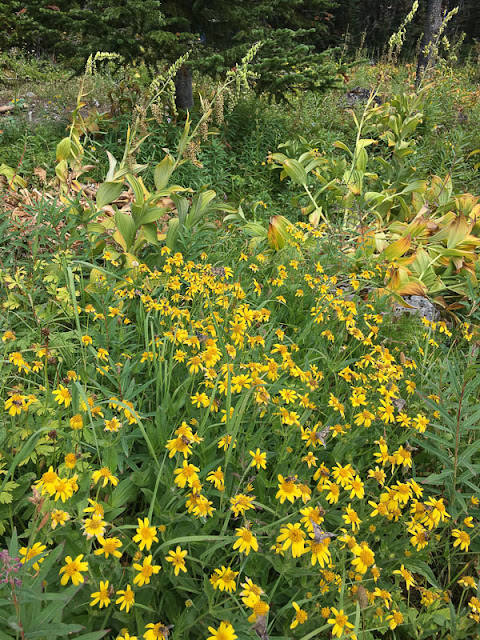 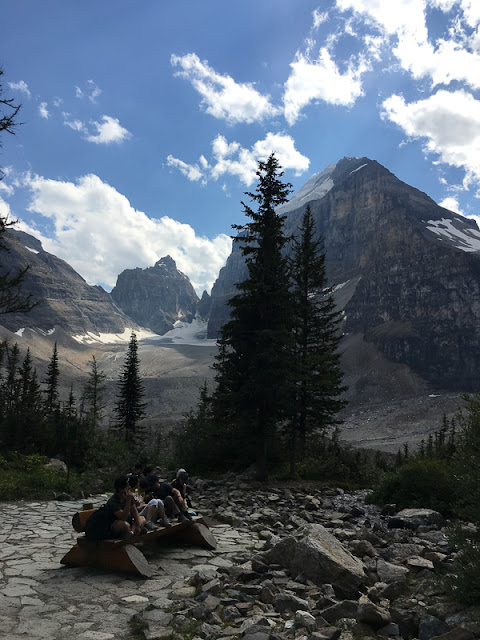 On the way down we met a marmot siting on a rock. He was much more worried than we were.

We met up with OH and his companion at the bottom.

"Did you see my hat" he asked.

It seems that he left it on a bench half way up the mountain. He and his companion were taking a banana break.

Why did he leave his hat on a bench?

BECAUSE A GRIZZLY BEAR HAD BEEN FOLLOWING THEM DOWN THE PATH, AND THEY APPARENTLY DIDN'T WANT TO HANG AROUND.

In the excitement he left his hat behind.

Did they take a photo of the bear?

They were 'too busy packing away the banana'. 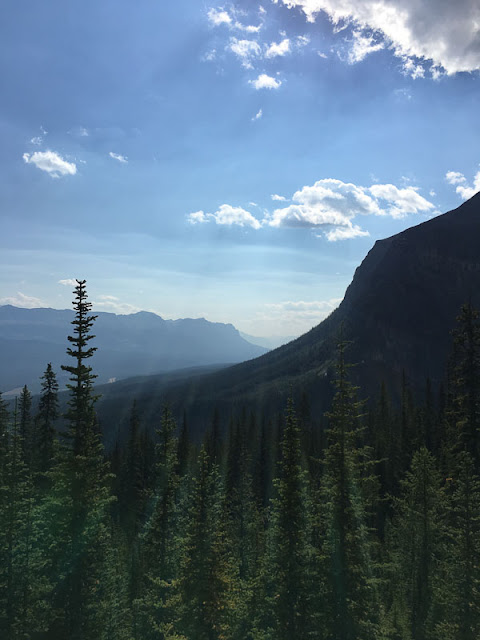 Personally, I have never been so glad that I kept on up the mountain.