monologue of a lone hiker in Paradise

En route to Paradise via the River Jordan…….. 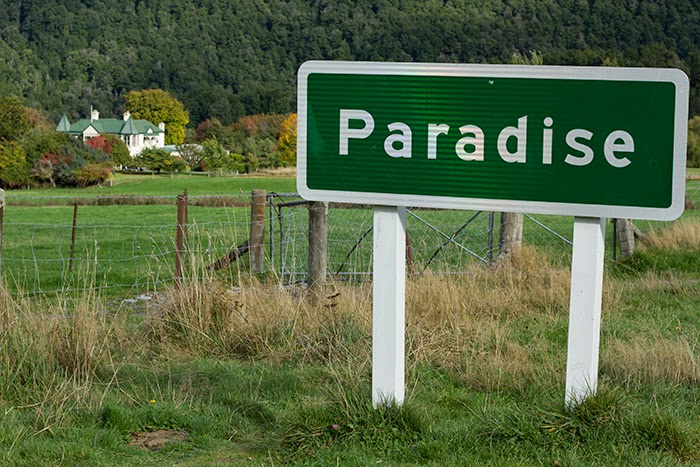 The river Jordan was small enough to drive through even without a 4x4, which was fortunate as I really wanted to get to Paradise.

Having seen Top of the Lake last year , directed by Jane Campion, I have yearned to reach this particular destination to see if it really is the home of drug dealing, heavily tattooed bad, child abusing people.

And just to say that I have been there. 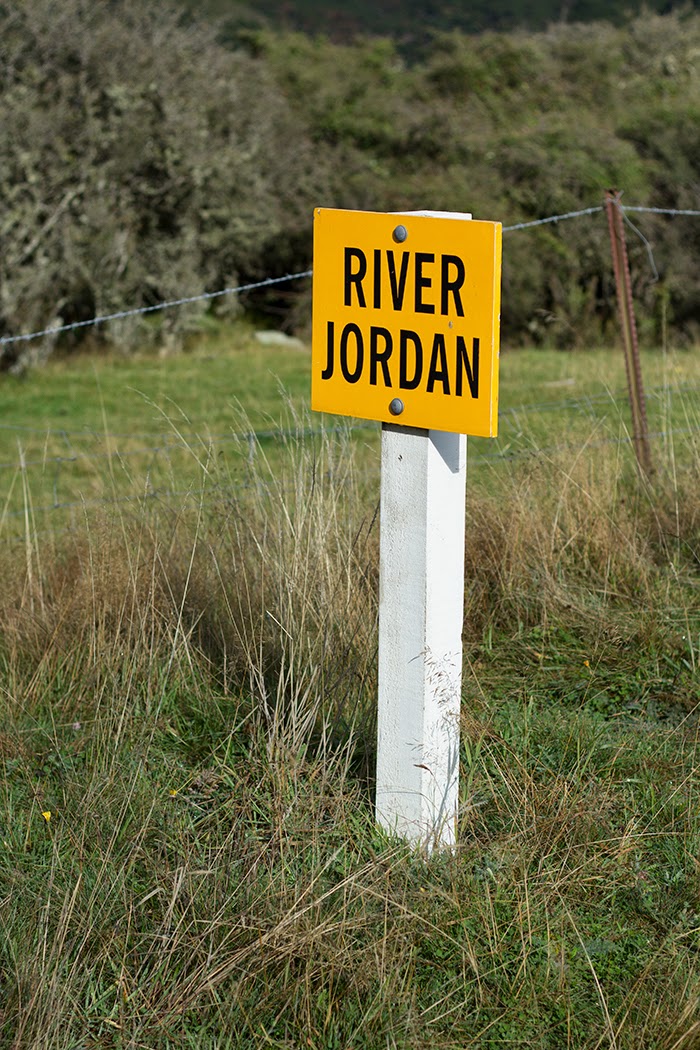 The sun came out as I drove through and on to the end of the road.

Lord of the Rings country too, but I don't watch or read that, so I can't tell you which quest, battle, or volume of the novels I was heading towards. I am not enamoured with fantasy quests.


I got to the end of the road, finally stumped by a larger ford and my low slung Datsun.


I did some tourist attractions ( sheep, river, lake), and walked through a forest and communed with a robin and some moss. 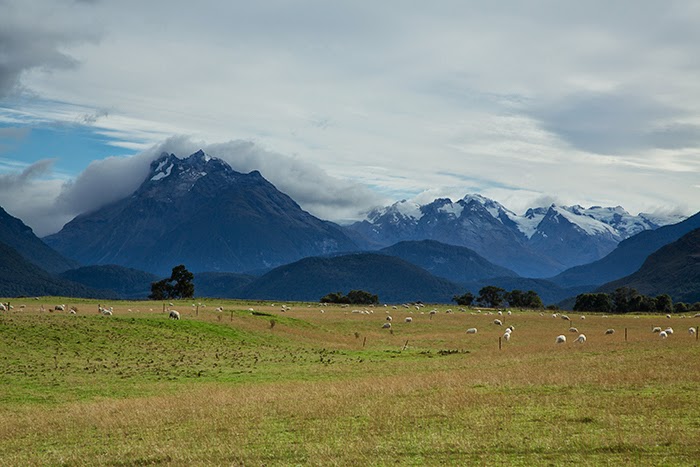 And I felt very safe.

No baddies.  Just Japanese tourists asking me what they might see down the road in terms of 'big attractions' - I was tempted to say 'trees and sheep and mountains' - but I was polite and informed them that there were no specific 'big attractions', just more of the same, which in my view was a pretty massive attraction.

SO WHAT WENT WRONG THE NEXT DAY?


It started at Moke Lake ( where Top of the Lake was really filmed, near Queenstown, not Paradise….)


Last time I visited I walked around the lake with a  random stranger that I met who happened to be a German psychotherapist called Ulrika. I set off to do the same again, but a little voice started nagging in my head………

you've done that before

it's quite a long walk, and you need to get back to Gore before it gets dark…..

why don't you explore the other path into the mountains?

good plan. it's on a dirt track so I can't get lost.

remember last time you joked with Ulrika about the 10 things you should carry when out in the mountains, and how you never had most of them?

I seem to remember we only had food and water, but felt significantly better equipped clothes-wise than the two lovely young girls wearing bikinis……

So can you remember what the 10 things are?


So you did register your intentions with someone, so they will know where to look for you when you don't turn up at work on Tuesday?

Well no, not really; I changed my mind after I set off this morning, and so no one has the faintest idea where I am.  And my mobile phone doesn't work here, so that's not really very good at all. So I'll have to be very careful not to fall over, stray from the path or have a heart attack.

I have wondered about getting a personal locator beacon, but it seems a bit over the top for the walks that I do on my own.

But remember the story the guide told you recently about the girl who went slightly off piste on the Milford track and nearly died after 3 days in the cold, lost in the bush ….

and still I like to live a little dangerously

'little' being the operative word here.

If I have to die in the bush, then so be it. At least I will die in a nice place.

Anyway, I am only going for a little explore, and so lets enjoy the scenery and stop thinking about how irresponsible I am being.

What about the other day when you were up at the gold mine?

Well you could have been clubbed to death by the dodgy looking  man carrying a pick axe.

Indeed I could. But instead I was really brave and passed the time of day with his mate, who told me they were 'mineral collectors'. Why they needed to go up the mountain under cover of darkness remains a mystery; I was hurrying back down before it got dark. And I had my torch.

You never know who you might meet, all alone in the middle of nowhere.

I know. But if I let that worry me I would never go anywhere. All the same, I would be enjoying this walk much more if OH was here to protect me.

So how far up this road are you going to go then?

Well I'd like to see what's around the corner, even if I don't make it to Arthur's Point. 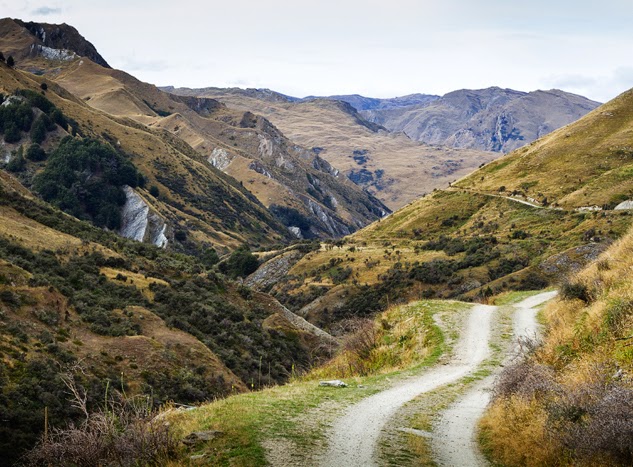 It's not the most beautiful view of the weekend, but I've started so I'll finish . I need the exercise after 4 weeks of sitting on a couch nursing a sprained ankle. 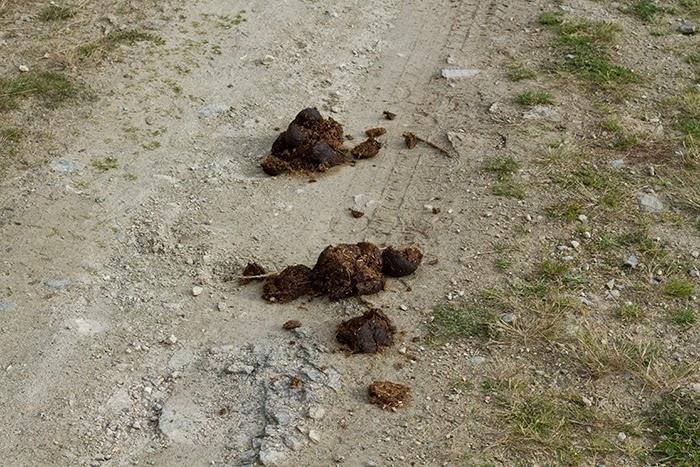 Well you needn't have worried about nobody finding you, there are horses using this track. Presumably with riders.

But if you are going to worry, you might as well add rock falls to the list.

One of those could do you in. Remember a lady died a few weeks ago when a rock fell on her car somewhere in New Zealand. 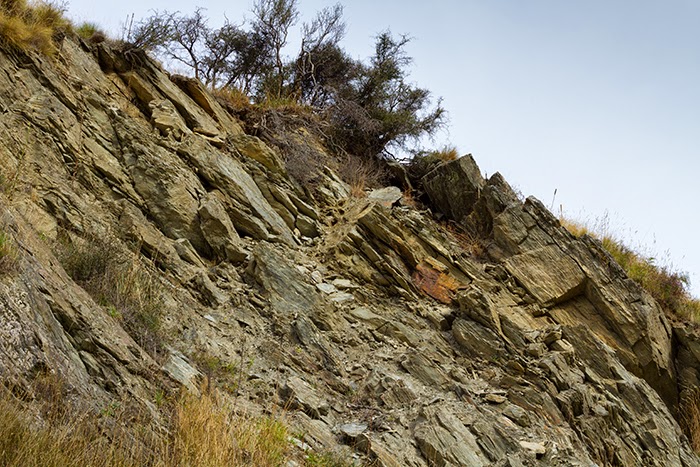 Well I'll just have to walk quickly under this bit then.


And how long is it going take you to realise that it's not just horses that use this road? 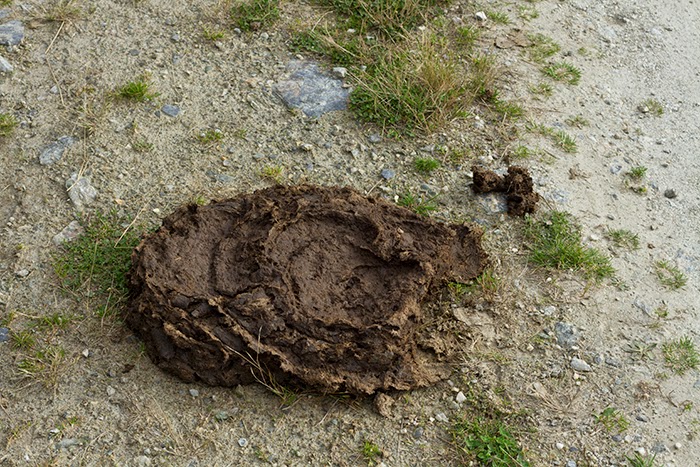 Ah. Cows. Not again. I've already had to abandon a lovely walk down to the Dart River due to the small matter of a very large bull between me and the river.


Now I am worried.

This is a narrow road.

If I meet a bull or even a group of cows around the next bend where would I go?

Up is a steep unstable rock face.

Down is a steep fall into the river.

Can cows climb up rocks? 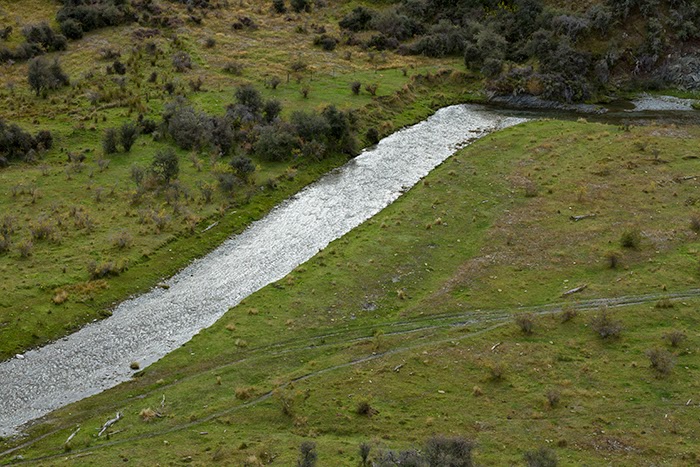 I haven't seen any cows. Where are they. How fresh is this dung?

A day old possibly, as it is slightly dry. That's good then.


You are being really silly now. The cows are way down the hill in the old goldmine area. 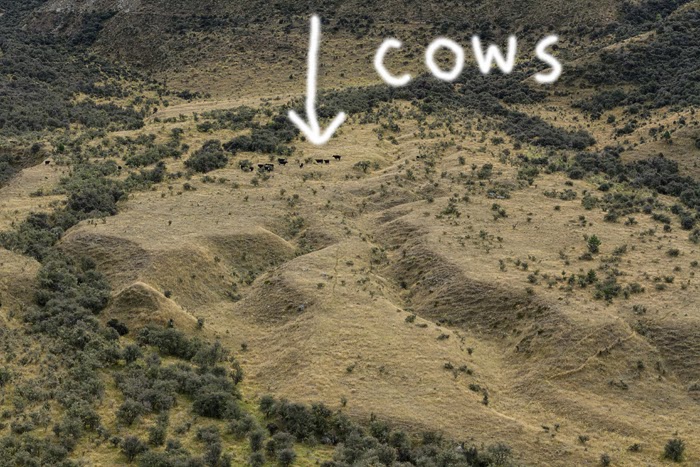 Phew. That's a relief. Now I can get on with my walk and relax.


But what if there are more cows around the corner?

All this worry might give me a heart attack, and I haven't seen anyone around since I set off.

Can't you see there are two people over there? 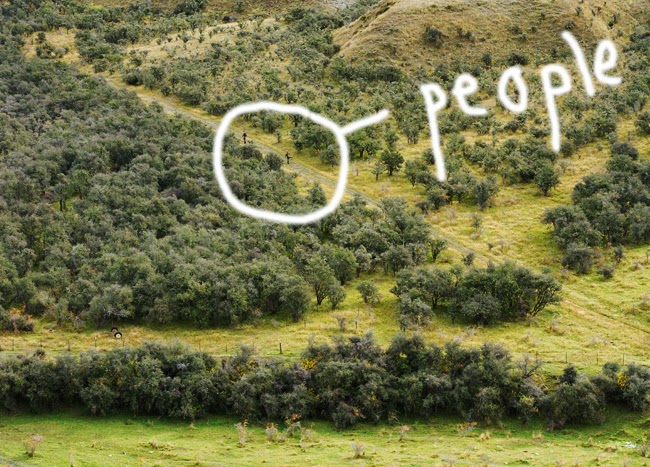 So there are. And the cows will get them first, for sure.

But what are they doing coming down out of the bush?

What are they carrying?

A man was killed last week accidentally while out hunting by another hunting party that didn't see him.

Should I shine my torch at them?

Calm down. They are on their way home, and so are you.

Go back to the lake and feed the ducks.

You are not fit to be let out on your own.

Go and eat your snack and next time you go out, follow the advice that you have been studiously ignoring.

Serves you right if you didn't enjoy yourself.


P.S. In case you are concerned for my irresponsible nature, if I had been going for a proper hike I would, of course, have had all 10 items on the list. Or preferably gone with someone else who did.

Here are some useful links for sensible people.

The ten essentials a video to remind me lest I forget.

Plan and prepare - the outdoor safety code from the Dept of Conservation , New Zealand.

A trip to Stewart Island - Rakiura

Before any more time passes, I must tell you about my weekend trip to Stewart Island, as despite rather grey skies it was, to use a Kiwi phrase 'awesome'.

I opted to fly, not being one for high seas.

The flight leaves from Invercargill airport, famous only for its car hire company and twin palms.


We were delayed for 90 minutes due to a band of rain passing through. For it is a very small plane, and easily affected by weather .

The cockpit looked old. The pilot looked far too young to be responsible for my life and that of the 7 other passengers. he advised us that we could escape by pulling the window out if necessary, but requested that we save this for emergencies as it is 'very hard to put them back again'. When we arrived he morphed into a baggage handler and bus driver, delivering us to town.

Town being Oban. It is not possible to escape Scotland in New Zealand.

Oban is the hub, where the ferry arrives to, and the tourist trips depart from.


Visitors are not allowed to bring cars, and most travel is by boat.

I travelled to Ulva Island; one of the highlights of my trip down under thus far.

Muttonbush leaves were legal post here until the 1970's, being plentiful and easy to write on.


Why is Ulva Island so wonderful?

Because there are no predators there; rats and possums have been eradicated and a careful watch is kept for new invaders arriving by boat or by swimming.

I duly checked myself for rats on arrival.

The vegetation had me in heaven again.

The absence of a tripod was an issue however.

I didn't get to see a Kiwi, but did get a close encounter with a Weka, another flightless bird.


Mostly I just enjoyed the birdsong and the ferns and creepers. 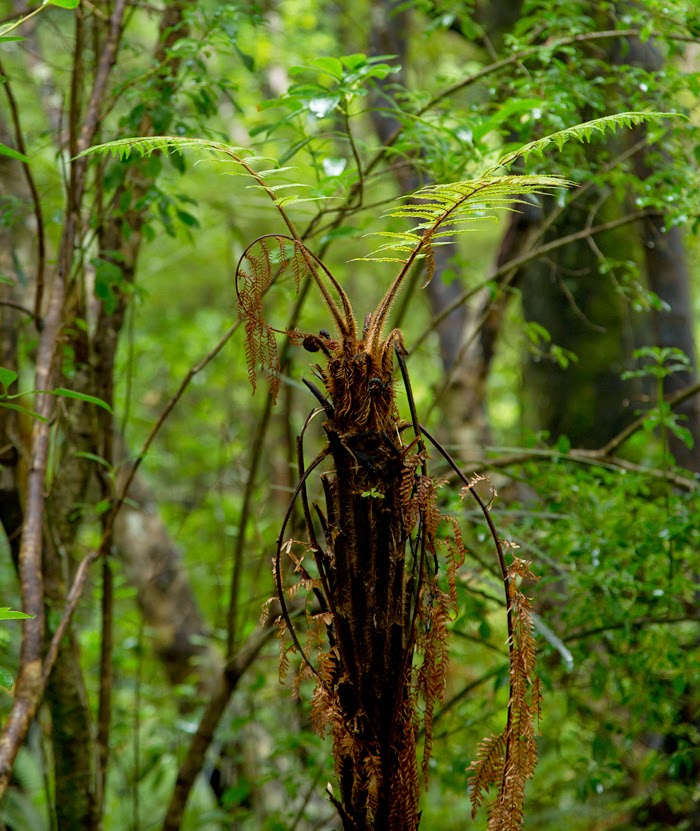 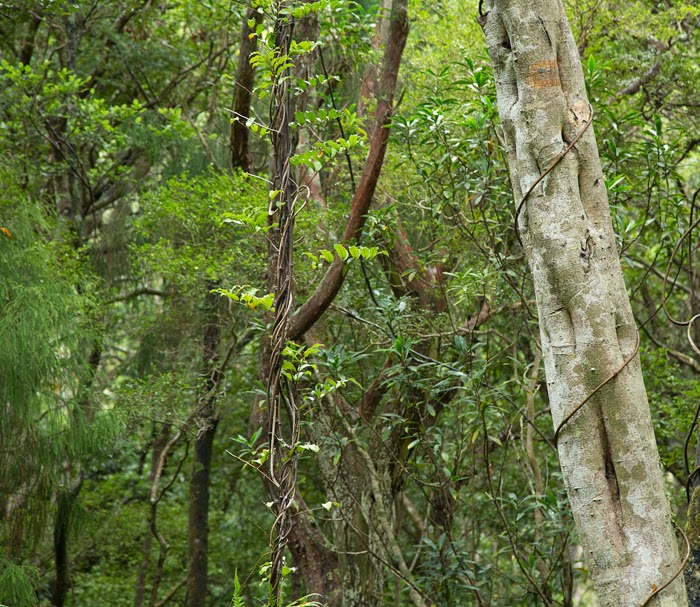 And the beach at Sydney Cove


I wandered lonely as a tourist,

then back to reality after a fews hours for a slap-up lunch on the sea front, and some more sightseeing.


A memorable trip, thanks to Stewart Island flights and the ferry operators to Ulva Island.


Not a weekend for major photographic achievements, but certainly one for good memories.


I like this quote that I found on the Stewart Island website in regard of Ulva Island.


Have a care for this island. Sanctuaries such as these are imperative. There is no song of Bellbird or Tui on the moon.
Olga Sansom, 1970
Past Curator, Southland Museum and Stewart Islander


You can listen to the bellbird song in my previous post; it really is uplifting.

I'm off out again to look for something to photograph.