thinking positively ; the art of coping with an english 'summer'

The image above was taken on my walk today; I have discarded my crutches and plaster, thanks to a kind consultant surgeon who agreed with me that the minor injuries unit had gone for overkill in treating my cracked bone. I am now wearing 'sensible shoes' and avoiding vigorous walking and tennis. 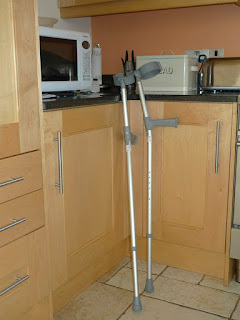 After 48 hours of getting around on these crutches, with sore shoulders and hands I had mastered the art of wheely chair mobility and had felt like a new woman scooting around my kitchen , with a cup of tea in my hand, not spilling it.

Note the incredibly useful bag hanging on the back for keys, phone, glasses and anything else that I thought I might need. I had crawled on my hands and knees down the stairs with this chair and my crutches, so determined was I to be more mobile. So for those of you who think you might need to be in a non weight bearing plaster, I recommend you get rid of all carpets, as you will be immobile any other way.

So delighted was I with this advance in technology that I tidied the chest of drawers in the kitchen; not before time. I found a few oddities that had been there for a long, long time. 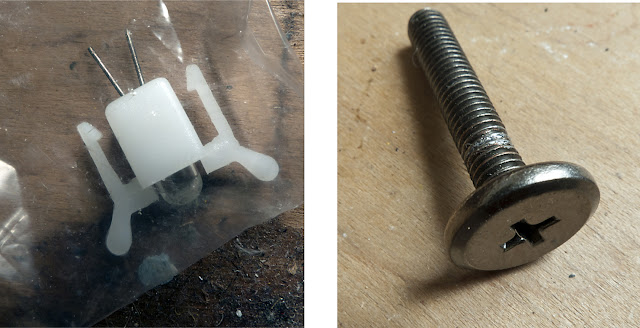 Actually, on second thoughts please don't. I have thrown them away and would hate to find out that I shouldn't have.

All this an hour before I got the phone call that allowed me to attack my plaster cast with scissors and free myself from 6 weeks of misery.

So today I took a gentle stroll by the stream and through the mud. I didn't take a camera because I couldn't for a minute think that the grey drizzly weather would be conducive to photography. I did have my phone with me, and experimented with taking videos of the wind and the grasses. The quality is very poor and really nothing happens at all except that some drops of rain fall, the wind blows and the calls of a crow and a peacock are heard near the end, just when you are probably getting really really bored. Do not try to view large; all you will see is fuzz.

I can't recommend an iphone 3G for video production; every time the wind blows there is an tremendous distortion, and since it was the sound of the wind that I was trying to capture, I was not happy with my results. next time I will try my proper camera.

I came home, hosed down the dog, and made myself a lovely strong cup of tea with a teabag from my new tin.

I have rediscovered the joy of just being outside, whatever the weather, listening to nature.

keeping up with Beckham and Rooney ; the joys of a metatarsal injury

The week has started well. Other half is in India for the week, and my youngest has just left home to be near the Farrow and Ball shop in Islington, where life is so much trendier, and he can maintain a social life fit for one of his age.

I meanwhile, having been hobbling around for a week after tripping on the driveway carrying a newly repaired PC, decided to do the right thing and try out the local urgent care centre to find out whether I had broken any bones in my still bruised and tender foot.

Off I drove and was 'triaged', seen by a very kind nurse practitioner and then X-rayed all in the space of an hour, as most of the local populace had yet to wake up and realise that they needed to see a doctor urgently.

We looked at the x-ray, hummed and ha-aahed a little, and then decided that there may well be a crack in the 5th metatarsal. Kindly nurse ran off to check with a couple of doctors, and before I knew what was happening, I was prone on a couch having said foot encased in plaster up to the knee.

'Aren't you going to put a rubber thing on the bottom that I can walk on?' said I hopefully. 'Oh no' said she 'you are going to have crutches and be non weight bearing for at least 6 weeks'.

Going to have an Xray now seemed like a really big mistake. I had imagined a walking boot or bulky bandage, but crutches? No thanks.

Within the next two hours I discovered how difficult things are going to be. A friendly taxi driver dropped me home, and I hobbled to the front door. I had been advised to sit on my bottom to go up and down stairs; but the two concrete steps to the door weren't softly carpeted or dry. I stood there for a while, wondering how on earth to get up two steps. I can see I am going to learn a lot about disability in the next few weeks.

So now I am unable to

I won't bore you with any more, but the list is getting longer as I write.

Other half rang from India -  'you've got the footballers fracture' - he gaily announced.

And he is right. Beckham and Rooney are just two footballers to have suffered a similar plight. If I spend a large sum I could get an inflatable boot like they had, that allows some sort of normal walking. But I don't have access to the kind of advice that they do, and so will dutifully sit out a two week wait for my fracture clinic appointment at the hospital that is about to be declared bankrupt. 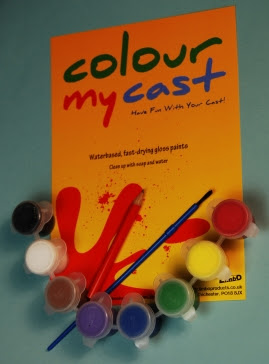 I have already ordered my plastic tube to keep my foot dry in the shower. I was tempted by the paints above from the same website , but decided to remain a dignified shade of off-white for professional purposes.

Dog has been shipped off to a friend for a few days, as there is no way I can walk her with both arms attached to crutches.

And I am spending my time sitting in front of the computer waiting for a very long day to end so that tomorrow I can go to work and see how difficult that is. At least I have a wheely chair in my office, so will be able to scoot around my room taking in the door, the cupboard and the desk as I go.

I have armed myself , as advised by wise individuals on the internet, with a shoulder bag for carrying essential items. The only problem is that I keep taking things out of the bag and forgetting to put them back in before I make my way from one room to another. I proudly hopped across the kitchen with a sandwich, and then sat down, only to discover that I had left my cutlery the other side of the room.

It is going to be a long week.

I am investigating the merits of Pinterest as a means to pass the time when I would normally be doing all sorts of things that involve walking; check out my 'boards' and see what I have found if you are bored and have nothing better to do!

I am returned from Spain where dogs use the lift in hotels and the sky is blue.

The journey there was slightly unusual in that we flew from London City airport with British Airways.

We got three quarters of the way to Barcelona without a hitch, but then the captain spoke......

"We regret to inform you that the plane has a technical hitch. It will not be possible to fix it at Barcelona, so we are returning to London"

Joyful sounds from all on board; everyone remarkably calm considering. No one panicked, and no one got angry.

After another three quarters of an hour we reached London and returned to the lounge. " Please wait in the lounge and in 10 minutes we will inform you whether you should wait here for the plane to be fixed, or transfer to another plane at an alternative airport. More sounds of joy. Some passengers already knew they would miss their connections, and were a little miffed.

The alternative was potentially worse, and we all heaved a sigh of relief to be safely on the ground, without the need to employ the three fire engines standing by.

So we took up residence in the lounge, near the information desk , to await further instructions.

Ten minutes passed, and then another ten; not a peep from British Airways. 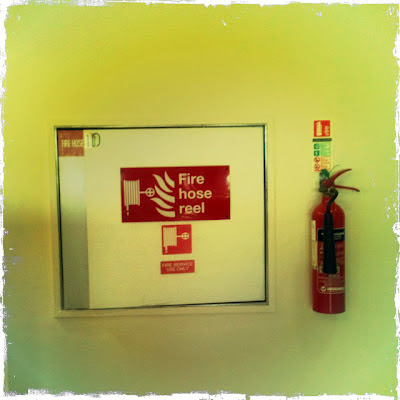 I amused myself looking at the fire extinguisher on the wall and chatting to a couple who could see their weekend in Barcelona disappearing into a long day at the airport. Other half paced around and waited for information.

Now it seems to me that the best way to keep people happy is to tell them what is going on. The man at the information desk happily announced that our plane was to be replaced with another, and that we should wait for it to be announced on the departure board. Did they inform the people not sitting beside the information desk?   Of course they didn't.

One by  one worried individuals took their turn in the queue and were informed that everything was going to be fine, and to keep an eye on the board.

Did they announce the new flight on the departure board?   Of course they didn't.


After another hour a message finally came over the tannoy telling us to get back on another plane. By this time at least 100 individuals had asked the man at the information desk for information, and each had separately been told that they should wait for the message on the departure board that never appeared. The instructions promised after 10 minutes never arrived.

British Airways have nothing to be proud of with respect to their public relations and communication.

We set off again and this time we made it to our destination, where the rain that had shrouded London was nowhere to be seen.

We soon forgot the journey, and made our way to the Costa Brava, where dogs use the lifts and the sun shines every day.